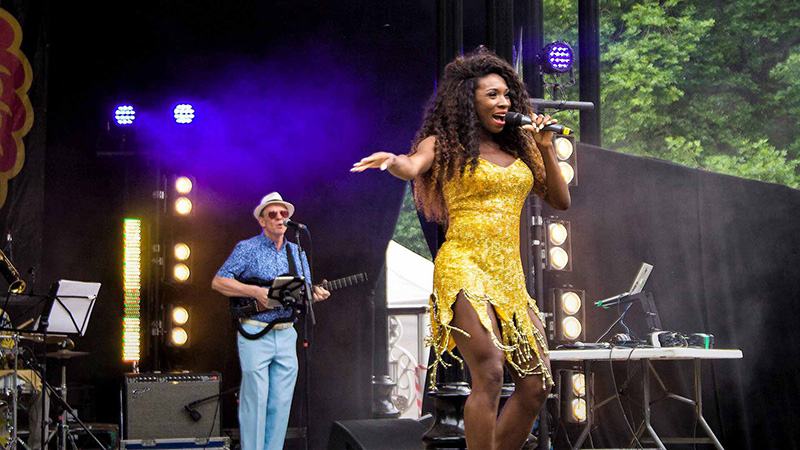 Sambossa – a band playing the sounds & rhythms of Brazil.

With music ranging from sultry Bossa Nova & grooving Afro-funk to blistering samba, Sambossa have everything needed to delight both the listener & the dancer. Band members are drawn from the larger ‘VIRAMUNDO’ which is a larger band of 6pc upwards however Sambossa holds an attraction for those seeking great Brazilian music as it works well in smaller venues and for less of a budget.

Guitarist PAUL RUMBOL leads this band as well as being band leader of the celebrated group Viramundo. He also sings & plays the cavquinho (small Brazilian guitar) & and also utilises a guitar synthesiser to bring a full sound to this small line up and enables them to present a very complete & totally unique sound. Paul has been working alongside the most talented Brazilian performers for more than 20 years.

Sambossa features the unique vocal talents of ELISANGELA MAHOGANY, who brings an originality to some classic Brazilian tunes. Originally from Salvador Bahia, Elisangela’s strong voice, infectious energy & sensational stage presence & experience as both a singer & a professional dancer brings a great dimension to the band.

From Rio the band is fortunate to have the hugely talented MARCELO ANDRADE, who showcases his saxophone & flute styles. Marcelo is an award winning multi-instrumentalist & songwriter from Rio De Janeiro, Brazil. He has been working with Sambossa since it’s formation & has a writing partnership with band leader Paul Rumbol.

Sambossa is also available as a trio and duo for smaller events/budgets.