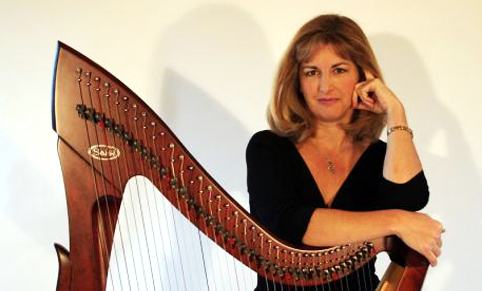 Sarah Deere-Jones is a classically trained harpist with a huge variety of musical experience and interests.

Whilst still performing on concert harp, she has in recent years been concentrating on traditional music, playing Celtic, English and her own compositions for gut strung and wire strung Celtic harps. She is known for her virtuoso playing on lever harp and her compositions are sold to harpists all over the world, and she is also in demand as a teacher and performer at harp festivals and for on-line coaching internationally.

Sarah started her professional life after leaving the Royal Academy of music where she was a prize winner and gained her LRAM and LGSM performance diplomas and played with orchestras such as the Bournemouth symphony, BBC symphony, Tenerife Symphony, Ulster orchestra as well as theatre orchestras such as Festival Ballet, Ballet Rambert, Bolshoi ballet and the English music theatre orchestra at the Aldeburgh festival. She also performed solo recitals at arts clubs across the UK, and on television and radio.

Venues
Sarah has played in Hotels such as The Ritz, The Savoy, The Hyde Park, and Claridges in London, for Ramada Hotels in the Middle East, and on board the cruise liner QE2. In Southern England she regularly plays at The Grand Hotel, Eastbourne, the Chewton Glen, the Royal Bath, Rhinefield House, Le Coq au Vin – Winchester, Highclere castle, Somerley, Summer Lodge, the Lygon Arms – Broadway, and Wilton House.